Snell Isle owes its name and existence to Mr. C. Perry Snell. A Kentucky pharmacist, Snell first visited St. Petersburg during his wedding trip in 1898. The next year he purchased his first property in the area on 4th Ave N. When all was said and done, Mr. Snell purchased 600 acres of land on the northern side of St. Petersburg. This area is now called Coffee Pot Bayou. 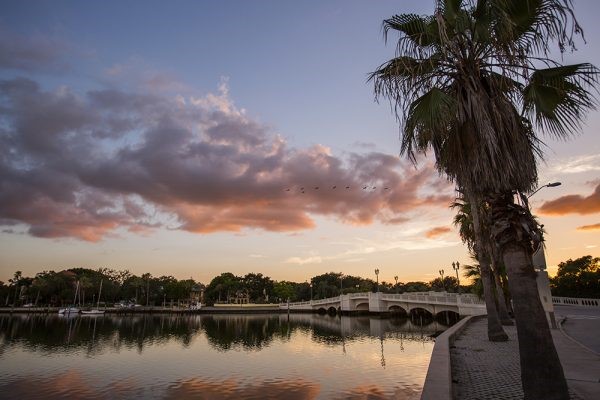 When Snell originally purchased the land it was such a low-lying area that fill dirt from Tampa was brought in to raise the ground. In 1911, he began his first development on the small isle of mangroves, which would become known as Snell Isle. The first nine homes he built were classic European design on Brightwaters Bayou. Snell wanted them to be as authentically European as possible and traveled throughout Europe for statues, tile, and decorative ornaments. The nine homes were completed at a cost of over $1 million dollars – a pretty hefty sum at that time. Snell wanted his upscale development to be “the pearl of Pinellas.” He put up many sculptures, including concrete renderings of jungle animals and griffins at street intersections.

Not long after the statues were erected, thieves and vandals started to damage them or take them for themselves, including 2 that showed up in the driveway of a retired custodian for Northeast High School, years later. By 1980, nearly all of the originals were gone. Two of the missing statues were discovered some years later gracing the home driveway of a retired Northeast High School custodian. Over the years all of the missing statues have been replaced with duplicates, and still more have been added. Today, the neighborhood is filled with statues of lions, panthers, tigers and griffins.