Sarasota is far from a sleepy town.  I’ve already talked about parks, shops, and beaches to help you wile away your daytime hours, so now let’s talk about how to fill up your evenings!  Sarasota has a rich, cultural nightlife, with plays, musicals, ballets, and operas in spades, earning this part of Florida the nickname “The Cultural Coast.”  Check out our many options below, along with some of the productions being put on this season.

Asolo Reperatory Theater – Located in the northwestern side of Sarasota by the Ringling Museum, the Asolo stages up to fifteen productions every season, spanning a diverse repertoire of newly commissioned plays, bold reinterpretations of contemporary and classical works, and provocative new musical theatre experiences.  This 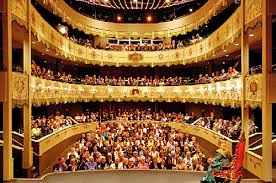 season look for 1776, playing now, the classic You Can’t Take It With You, Tony-award winning The Heidi Chronicles, American song and dance tribute Pulse, and the one-woman comedy My Brilliant Divorce, among several others.  http://www.asolorep.org/

FSU/Asolo Conservatory – The Conservatory is a three-year long graduate program, culminating the a Master of Fine Arts degree.  Only 12 students are selected to be a part of the prestigious Asolo Conservatory, their work showcased in productions throughout the year.  Still to come this season, a play about interpersonal relationships among slacker teenagers called The Aliens, a kiss changes the course of two young women’s lives in Stop Kiss, and the classic George Bernard Shaw Candida. http://www.asolorep.org/conservatory/this-season

Golden Apple Dinner Theater – The Golden Apple is back with a new series beginning at the end of December.  With a convenient location in the heart of downtown, and shows running Tuesday through Sunday, there is plenty of opportunity for you to catch their newest play Viagra Falls.  http://www.thegoldenapple.com/

Gompertz Theatre  – Also located downtown, this intimate 160-seat theatre was opened by the Florida Studio Theatre in 2002.  Still coming this season: civil-rights era The Best of Enemies, and In the Book of, a story of two women who lose their husbands at war.  http://www.floridastudiotheatre.org/theatre-gompertz.php

Player’s Theater – The Player’s Theater is a non-professional community theater located north of Fruitville off of US-41, although it gets its fair share on former professionals in the biz.  The Player’s Theater is currently putting on Annie (through Dec. 23rd), and productions still to come include Sunset Blvd., based on the 1950s movie; 9 to 5, a personal favorite about three ladies who call mutiny on their employer; Harvey, a play some might recall from the Jimmie Stewart movie; and Side Show, based on the true story of conjoined twins Daisy and Violet Hilton.  http://www.theplayers.org/

Sarasota Ballet – Called “America’s foremost exponent of Ashton ballets” by the New York Times, the Sarasota Ballet is the gulf coast of Florida’s first and only professional ballet company.  The Nutcracker is being performed this week, and coming soon are Ashton, Tudor & Walsh, Sir Frederick Ashton’s “La Fille mal Guardee,” and Theatre of Dreams.  http://www.sarasotaballet.org/

Sarasota Opera House – Originally part of the Asolo Theatre, the Sarasota Opera House moved to its own theatre located downtown in 1979.  The Opera House was recently renovated to accommodate the audience and the orchestra of the 21st century opera, while restoring the opera house to its original 1926 glory.  This season, the Opera House productions include: Turandot, The Pearl Fishers, A King for a Day, and Of Mice and Men.  http://www.sarasotaopera.org/

Van Wezel Performing Arts Hall – Set alongside Sarasota’s picturesque bayfront, this unmistakable purple landmark of Sarasota has been in business for over 42 years.  The Van Wezel brings a broad spectrum of the world’s finest performing artists to Sarasota’s residents and visitors.  A mere few of the several noteworthy performances this season include STOMP, Les Miserables, Chicago, songstress Natalie Cole, and Monty Python’s Spamalot.http://www.vanwezel.org/

I absolutely love the cultural venues here in Sarasota!! Whether you want to catch a play at the Asolo, including the Historic Asolo at Ringling Museum, or take in a musical experience at Sarasota Opera or with Sarasota Orchestra, you cannot go wrong.

Sarasota has as much if not more arts per capita than larger cities like New York and Chicago and all for much less than you'll pay in one of those cities. If you haven't had a chance to see a show at any one of these or any other arts organization in Sarasota, then I highly recommend anyone to get out and experience.

A great resource for all of the arts orgs in Sarasota is the Arts & Cultural Alliance of Sarasota, visit: http://www.sarasotaarts.org/